In November 2016, as part of our Highlight Arctic project, we hosted an evening of poetry, performance and films from and about the circumpolar North.

Dressed in traditional Sámi clothing ‘gákti’, Niillas Holmberg, Sámi poet, musician, actor and activist read his poems and sang in a traditional style called “joiking”. Inuit poet and performance artist, Jessie Kleemann read her poems in her mother tongue Kalaallisut (Greenlandic), as well as in Danish and English, and closed the evening with a piece of performance art. 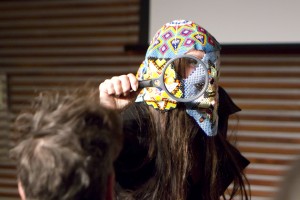 On the night we also screened two very different films: Pitaqangittuq, an exploration into the effects of climate change in an isolated arctic community, and Hollow Earth, a visual meditation on contemporary resources in the circumpolar North. Pitaqangittuq was produced by Artcirq, a community-based circus and multimedia company. Hollow Earth is part of one of seven films in the Beyond Horizons programme curated by Hanne Hammer Stien and Atelier Nord.

The sold-out event was presented in partnership with Free Word Centre, as a part of their ‘Living dangerously: Stories of Climate Change’ programme. Following immediately after  COP22, the night was a unique and timely chance for some of our London audiences to learn about the environmental issues the region is facing through encounters with Arctic art.

“Uranium, iron, oil, gold, diamonds; these are new names I am hearing when they talk about my land.” – Pitaqangittuq

You can listen to the whole programme here.

More information about the artists and the films:

Holmberg was born in 1990 in Ohcejohka (Utsjoki) in northern Finland. He is an award-winning poet, has published five books of poetry in the Sámi language and has been translated into more than ten languages. In 2015 he was awarded the Lapland Art Prize, Premio Giovani Literature Prize and nominated for the Nordic Council Literature Prize. He also performs internationally as a musician playing Arctic folk, electronic and world music.

Kleemann was born in Upernavik in northern Greenland in 1959 and now lives in Copenhagen, Denmark. She has participated in Nordic and international exhibitions as well as in many one-person exhibitions. As a poet, she has represented Greenland at Nordic and international literary events. She is especially known for her provocative performance art, in which she has developed a form of ‘body art’ based on ancient masque performances, with themes of heritage, land and myth. She writes and performs in her mother tongue (Kalaallisut), Danish and English.

In the isolated Arctic community of Pitaqangittuq (Nunavut), the climate is warming at an alarming rate, but it’s inhabitants are determined to adapt to their changing world by utilizing their ancestral survival skills and creativity.

This film is produced by Artcirq Inuit Performance Collective, based in Igloolik, Nunavut – a remote Inuit village in Canada’s eastern Arctic. Following youth suicides in the summer of 1998, Artcirq was established to provide Inuit youth with a vehicle for creative expression that maintains strong links to Inuit traditions and performance styles.

Hollow Earth is a visual meditation and examination of contemporary resource conditions within the circumpolar areas of the North. Combining research material, landscape shots and archival footage, this short film hopes to reflect over the changing image of the North, as a site where violence, desire, greed, and emotions are played out.

Hollow Earth is one of seven films that make up ‘Beyond Horizons’. Curated by Hanne Hammer Stien (Arctic University of Norway) and Atelier Nord (Oslo), Beyond Horizons, focuses on works by artists who question the governance of natural resources in Northern Norway and the High North. The issues it explores include land and sea rights, climate change, and the impact that local interventions can have on a global scale.

With thanks to the Free Word Centre, Embassy of Denmark in the United Kingdom and the Embassy of Finland, London.

Jessi Thornton on the illusion that the Arctic is an empty frontier, and why our forthcoming…15th July 2015

In this extract from True North: Travels in Arctic Europe, the award-winning author Gavin Francis…13th April 2015