Found in Translation, a reflection on the process by Viki Feaver

In April 2014 Highlight Arts were in Iraqi Kurdistan to work on a poetry translation project.

Viki Feaver was one of 8 poets including Ali Wajeeh, Kei Miller, Nia Davis, Zhawen Shally, Steven J Folwer, Mariam Al Attar, and Ahmad Abdel Hussein. The translations were presented at the Niniti Literature Festival in Erbil, Iraqi Kurdistan that took place from 22 – 24 April, in collaboration with Art Role and the British Council. 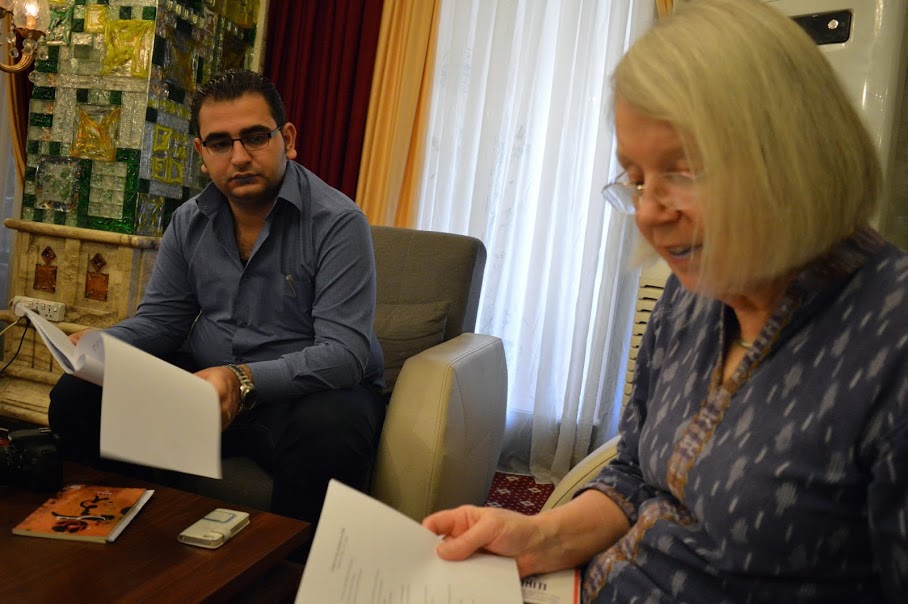 I almost turned down the invitation to be one of four British poets working with one Kurdish and three Iraqi poets in translation workshops organised by Reel Arts in Shaqwala, Kurdistan. It wasn’t bombs, or hijack, two of the categories on the British Council’s risk assessment form, that frightened me – it was translation. Not being a linguist and never having attempted translation before, it felt like the equivalent of being asked to a climb a high mountain without ropes.

Back home in Scotland, I’m so glad that my fear didn’t hold me back from the adventure of travelling to Kurdistan.The translation process was  daunting. But it was also, I discovered, enjoyable and satisfying – not unlike the experience of I had, one afternoon when our workshop was over, of literally scrambling up a mountain. I would never have done it alone; but as part of our party of poets and translators, and given a helping hand over the steepest and slipperiest parts, I somehow climbed to the top.

The workshops were set up so that all four British poets worked with all four Iraqi poets in pairs. Here, I’m going to deal with the process involved in arriving at a penultimate version of two  of the poems I worked on. I’ve omitted the final versions, hoping that they may be accepted for publication in magazines.

My first partner was the Kurdish poet, Zhawen Shalai, a journalist and critic as well as a poet. Our translator was Hoshang Waziri, a playwright, journalist, and our contact in Erbil, who  supplied this literal translation of Zhawen’s poem:

A Man Dies in Me

Cold is not active as used to be

Instead of a coat

A warm feeling covers me

A woman passes next to my lack of attention

And gets lips shivering…

A Power breaks down

My walk toughens up

The drops of hope

Lightens up more and more….

It’s not a rock that crashes

My first impression was that I found the title arresting and I liked the images at the end of the rock crashing and the man crumbling. But I didn’t really understand the poem until Zhawen explained that it was about the end of a love-affair. Then, I saw that the concept of the man being inside the woman was a metaphor for the way women can internalise the men they are in love with until they are completely controlled by them and lose all sense of their own identify. The poem is about a woman regaining her own power.

I began by going through the bridge translation marking phrases that felt awkward in English or that I found puzzling. For example, I asked Zhawen what she meant by a ‘warm feeling covers me’. and discovered that it wasn’t, as the literal translation suggests, like being covered by a blanket but a warmth that came from inside the woman. In my first version of the poem I changed this to ‘a heat rising in me’. I also changed the the narrative order at the beginning, rather pleased  with the assonance of ‘dawn’ and ‘warmed’. The ending I kept intact, feeling that it already possessed  a satisfying balance of syntax and images.

A Man Dies Inside Me

In this dawn, warmed

by a heat rising in me.

no longer gripped by cold,

no need for a coat.

But in me, the spell is broken.

My steps are firmer;

the frozen drops of hope

because it’s not a rock that crashes

but a man who crumples.

I showed this version to Ryan Van Winkle, the literary director of the project. He pointed out, as kindly as he could, that, first, I hadn’t created a poem that could be understood in English and, secondly, that I hadn’t transformed the original into a poem in my voice. ‘We invited you as a poet’, he said, ‘not as a translator’. Dashed, I went away to try again. Part of the problem I realised was that the literal translation, faithful to Zhawen’s Kurdish, uses no personal pronouns. As a poet who tends to overuse the first person pronoun, I was impressed by this and wanted to keep to it. Eventually, however, I realised that it was impossible for me to write a comprehensible version of   Zhawen’s poem without resorting to the use of ‘I’. Ryan reminded me of the power of some of my poems and told me to aim for a poem in my voice. I remembered, too, the advice of my friend, the poet Jacob Polley, just before I left Scotland:

Translation I’ve always found great the more liberties I took. There are endless arguments about this, but I’ve always found my loyalties lay with the effective poem in English, and with something like the infusing inspiration of the original.

Another friend, the poet and translator Anna Crowe, had told me to go for the images in a poem. I decided the principle image of Zhawen’s poem is of cold man living inside a woman whose power to freeze her is waning. Somehow I wanted to convey her sense of renewed strength and hope without actually using the word, ‘hope’, a word that’s become almost taboo in contemporary poetry in English. In a final version of the poem I imagined the man inside her as a snowman who melts in her heat. This meant doing away with lines at the end of the poem that I’d really liked in the bridge translation but had also felt a little uneasy about. Earlier, when I’d praised them to Hoshang, he mentioned that although ‘rock’ was in the original, ‘a rock that crashes’ was his idea.

The second poem I worked on was ‘C.V.’ by Ali Wajeeh, an Iraqi poet, living in Bagdad, who at only twenty-seven has already published three collections of poetry. As Ali has some English, we didn’t need as much help with my questions and his answers. This is the bridge translation of the poem by Lauren Pyott, with her notes:

I was born after the war;

I suckle from them blood

and the disappointments of tomorrow:

and in my blanket:

I identified immediately with what the poem was about. Born in 1943, just before the the end of WW2, I also had experience of growing up in the shadow of war , although not in an occupied country. In fact, Ali translated a poem of mine, ‘Victory Day Photo’, about the effect on me as a toddler of my mother’s and grandmother’s grief for my soldier uncle. ‘Cheese’, my father says,   wanting me to smile, as he takes my photo:

But I hold my flag, unsmiling

as if carrying the grief

of the whole house

Ali’s title is ironic. The poem subverts the list of schools and colleges attended and educational achievements that we expect from a C.V. by replacing them with a litany of the objects of war, matched in a visually witty manner to items connected with child-rearing. The effect is to juxtapose the violence and destructiveness of war with the nurturing of a baby, the thing we most want to protect and bring safely into the future.

We went through the poem line by line with Ali trying to explain to me the words and phrases I couldn’t understand. A ‘Karouk’, I discovered is a cradle and what Ali wanted to say is that ‘my cradle is a trench’. With the help of pictorial diagrams created with his fingers, he helped me to understand that the trench wall is made of sandbags and that above it is a soldier’s helmet, shaped like the cap on a baby’s bottle.

This is my penultimate version of the poem:

I was born after the war –

but my cries are khaki

and my cradle a trench

where I see – perched

on a wall of sandbags

and capped with a helmet –

a baby’s bottle from which I suck

the disappointments of tomorrow,

and the blood of the martyrs

whose bodies are rotting

I liked the alliteration of ‘cries’ and ‘khaki’, though in a final version I reverted to ‘my tears are khaki’, as it made more sense. I also tried to make clearer that the helmet was being worm by a soldier and that it was only ‘like’ the cap on a baby’s bottle.

It strikes me now that there is a similarity between writing a version of a poem in another language and writing a poem about a painting. To simply describe a painting doesn’t make a poem. Nor does translating a poem literally from one language to another, as the bridge translations demonstrate. To create a poem requires an emotional engagement with the original, as well as the tussle with language and form involved in writing any poem.

The task I saw initially as like climbing a mountain, I now think of as like carrying a bowl of water over an obstacle course without spilling a drop, or stealing a very fragile egg from a nest in the top of a tall tree and attempting to climb down with it unbroken. In that sense I’ve failed. Much of the water has been spilt; the eggshell has shattered. In some ways however I do feel a sense of achievement. I’ve come close to poets from a country previously unknown to me whose languages I don’t speak. I’ve made an attempt to translate the experiences described in their poems into poems in my voice that however imperfect will hopefully reach a wider audience. I’ve made new friends that I hope to stay in touch with. I’ve experienced something that I think all eight of the poets gathered in Kurdistan felt: a communication outside the barriers of language; something that maybe more often happens to children who speak different languages but who have no difficulty in playing together. To describe it as ‘a meeting of souls’ sounds pretentious. Yet perhaps there are invisible parts of us that while we were working away with our translators flew out of our bodies and had wordless conversations in the air.

The challenge of translation between two poems by Mariam Al Attar

In April 2014 Highlight Arts were in Iraqi Kurdistan to work on a poetry translation project. Mariam Al…30th December 2014