Syria on the Road: Stories of Conflict, Migration & Place by Yasmin Fedda 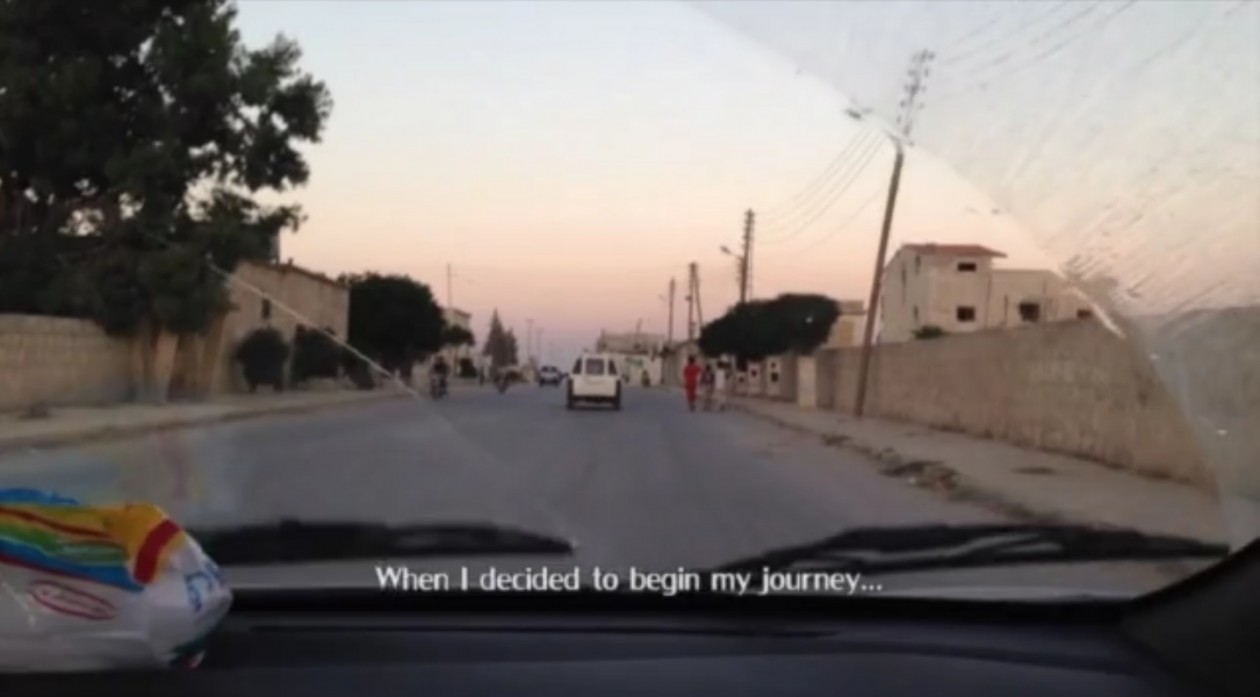 In early 2015, I was invited to run a workshop for the Syria Mobile Film Festival. Screening films made on mobile phones, whether made by professional filmmakers or total amateurs, the Syria Mobile Film Festival is the initiative of a group of Syrian filmmakers together with Al Share3, a foundation that works on projects (inside and outside Syria) that focus on the issues of human rights and the freedom of the media.

Serving as inspiration for this festival was the plethora of imagery and film being captured on mobile phones during the protests across the Arab world, and in particular in Syria. Sometimes edited, sometimes not, mobile phone clips have been frenetically caught and shared by activists and journalists across the region since 2011. In many cases these have provided the only evidence there is of particular events having ever taken place. Protests or atrocities, sometimes spontaneously and often secretly recorded, with the technology available in civilians’ pockets. As the festival’s organisers put it, these clips have spread “bravely outside the country and challenged dictatorships through sound and photo, so the mobile camera has became a main tool in the peaceful struggle for free expression”. Syrian filmmakers Zaher Omareen and Chad Elias suggest in their article, Syria’s Imperfect Cinema (in Syria Speaks), that this rise of film made on mobile phones has arguably given birth to a mobile aesthetic or style unique to the Syrian revolution. And that value judgements should not be placed on the quality or resolution of the images produced. A higher resolution does not necessarily give a clearer picture of the event, situation or context.

In 2014, the Syria Mobile Film Festival took place in various locations inside Syria – from community centres to people’s homes – despite the difficult security situation. But the festival has also held events and screenings in more than 20 cities around the world. The ‘Pixel Workshop’, which I had been invited to lead, took place in Gaziantep in Turkey and focused on using mobile phones to make films and creative documentaries. There were 12 participants in total, many of whom still live in Syria and none of whom had made a film before. The workshop ran in two parts. The first part was a 5-day production and development workshop where mobile phones, along with external microphones and lens adaptors, were supplied to each participant. Following this, myself and another member of the team mentored the participants online for a number of months until we met again in Turkey for part two – in which participants each had two days with an editor to complete their films. 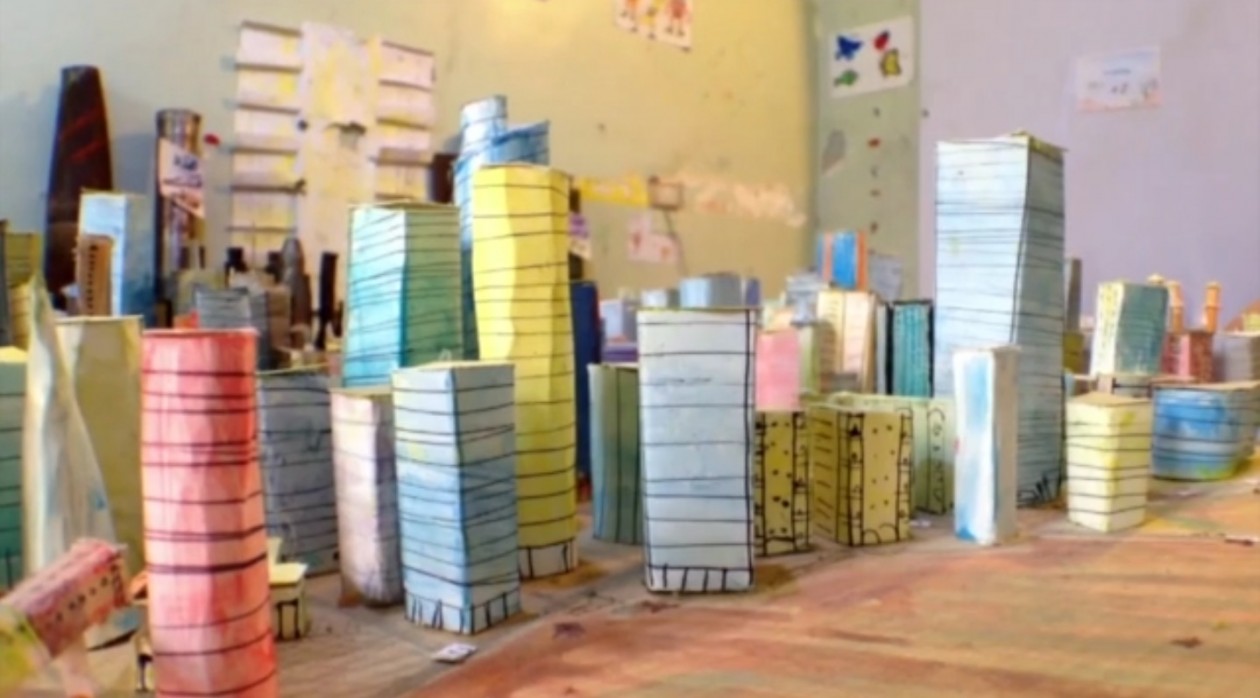 Still from The Architect, by Mojahed Abou Joud

I received a call from a young man in Aleppo, Mojahed Abou Joud, whom I was mentoring on his first short film. The focus of his film was a young adolescent boy who is rebuilding his city of Aleppo – one of the hardest hit of all the cities in Syria – in a room in his house, out of cardboard and paper. The boy was very shy and Mujahid was concerned.

“He isn’t telling me what I want! What shall I do?”

“Don’t worry,” I told him. “Just work with him. His personality will come through, just be patient”.

Mojahed Abou Joud and I spoke several more times. He took his time with his protagonist, and produced a beautiful short film, The Architect, about a boy whose creativity and desires for the future were expressed through his simultaneous shyness and strength. He rebuilt his city as a modern place, where he wishes to live – his dream for the future. 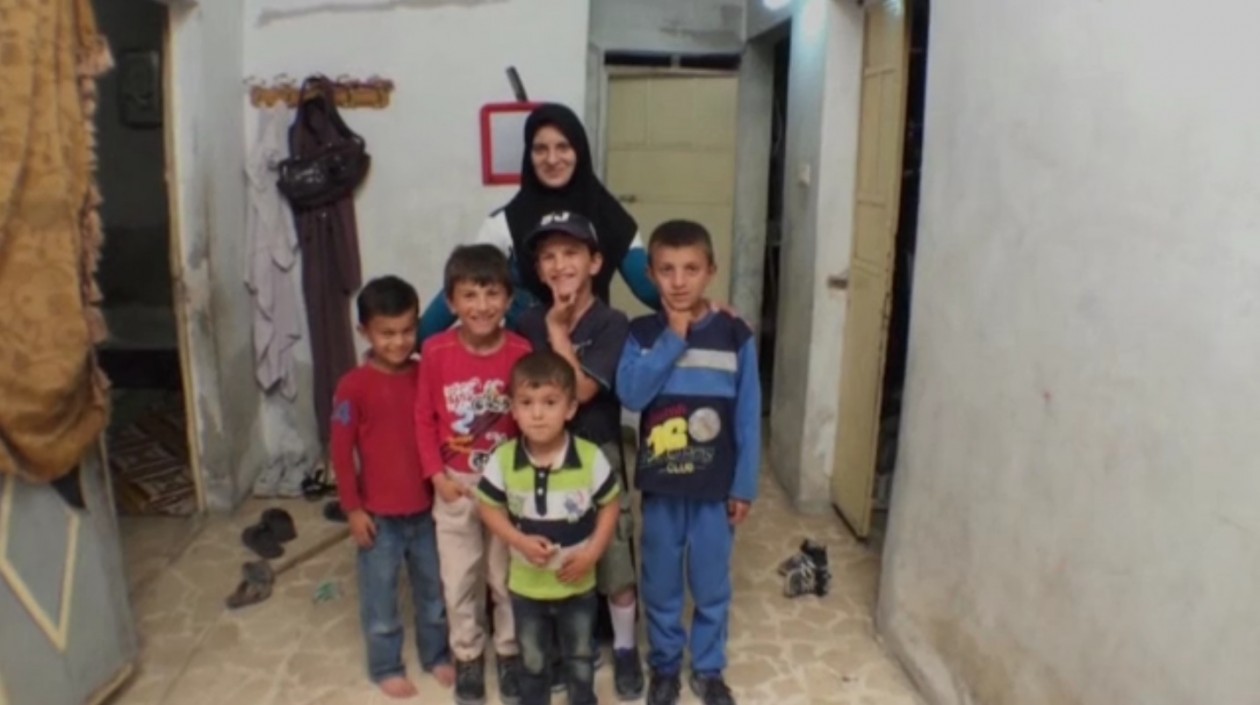 Still from Clustered, by Hassan Kattan

“I have experienced this myself many times, and there are thousands of others that are trying to save their lives by smuggling themselves over the border.” – Aktham Alwany

“I want to world to know about how people are struggling in Syria with the effects of the war and of bombs.” – Hassan Kattan

Other films produced through this workshop spanned many topics and styles. From the feelings of exile and displacement expressed in Ayaz Ismail’s One Precious Thing, to the intimate and observational film, Clustered by Hassan Kattan, about a family where one of five young sons lost his hands in a cluster bomb in Aleppo – capturing how the conflict is experienced within the home and through daily life. Then there is Aktham Alwany’s Barbed Wire – a first person essay-film about his attempts to smuggle himself into Turkey and the difficulties many Syrians face when it comes to their limited options for leaving the country.

The next edition of Syria Mobile Film Festival will take place in April 2016 – so make sure you look out for it! And check out their website for uploads of films  from previous editions.

Storytelling in a Time of War

All kinds of films are made in times of conflict: film essays, investigations, animations, comedies, first person films, the list goes on. So what is that motivates filmmakers to engage in creative storytelling in the midst of a war, or whilst witnessing massive and dramatic human displacement? There are so many questions that arise around screen-storytelling under such circumstances. From safety to aesthetics, and from ethics to all the possible uses of the works created.

What really strikes me is that producing a film is so much slower than delivering a news report. And, naturally, it is often immediate humanitarian intervention that feels most pressing at such moments. So why do people keep making creative films? What I have been hearing from people I’ve worked with, on this project and on others, is that they intensely wish to express themselves. They want the world to hear their stories, and the stories of those around them. There is also a desire to question what is happening, and to find ways to process and to challenge difficult situations as they unfold.

It has been fascinating to see the development of a number of initiatives that have supported first- and second-time filmmakers in Syria, and those who have been displaced from there.

Here is just a small taster of some of the films and schemes created to offer audiences an insight into ideas of home and exile in the Syrian context, and which have allowed the filmmakers to grapple with these themes through their creative practice – and to ask: What kind of storytelling matters? What equipment matters? What different forms or processes does it take to make these films? It is in no way exhaustive.

Similar to the Pixel workshop, the Hakawati workshop held face-to-face sessions as well as organising online mentorship, and taught the participants how to self-shoot and edit. Equipment was provided for all the participants. Maia Malas ran the project and says of it, ”the end goal was to make a short first documentary that contributes to the narrative of Syria outside of breaking news”.

Reem Karssli made Everyday Everyday as part of Hakawti. It is an intimate and honest portrayal of her family, as they become internally displaced in Damascus. Unable to leave their home, cabin fever, fear, and depression sink in. It is intimate, close and very emotional. Everything we don’t get in the news. 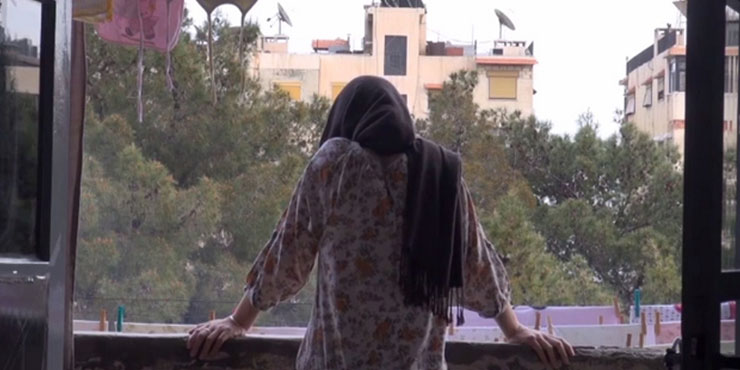 “Reality from behind the camera is very different. Maybe this is the thing that is making me do this film. Because the real world is harsher and uglier. That is why I keep filming.” – Reem Karssli

The film Blue by Abo Gabi was supported and mentored by Bidayat, a Syrian organisation that supports and trains filmmakers both in and exiled from Syria. As stated by Bidayat, “In documentary filmmaking the only objectivity is that which takes the director’s presence and perspective into account. Objectivity means being aware that truth lies in a plurality of perspectives and their compatibility. Objectivity is respecting the characters in the film, their stories and their personal concerns.”

Abo Gabi had been exiled from his home in the Yarmouk Palestinian refugee camp in Damascus. At the time this film was being made, his area had already been under siege for 450 days, and many people had died of starvation (it is still under siege today). Exiled from, but still in communication with, the camp, Abo Gabi made the film with and about his friend, the piano player Ayham. Ayham was living under the harshest of circumstances in the camp, yet it was art and music that kept the men connected to each other and to the world.

Bidayat also oversaw the making of another moving series of short films. A group of young people in the Yarmouk camp had approached them for some training. And despite the logistical difficulties they faced – with electricity cuts and a siege, not to mention the continual bombings and lack of food – Bidayat organised online sessions mentored by filmmaker Dahna Abourahme, and helped the group figure out what they wanted to make. The last segment in their film was a moving piece about a community garden created in an area where people have limited food yet found small ways in which they could help each other.

This is just a small selection. But bringing some of these works together, as we did at Platforma, can serve to reflect the moment of a place. It helps begin to understand what is happening, and the difficulty that some filmmakers have faced (and are facing) in making their works.

The films themselves provide an opportunity to listen to the stories of regular people across Syria, or displaced from it, and to witness the everyday realities that many are facing: barrel bombs dropped by the Syrian government, rockets from Russian attacks, torture, and destruction. Despite, or in spite of, these difficulties, there is the will to create and to get their stories out to the world. So it is right that we watch and listen.

And on that note, I leave you with this is animation by the musician and artist Hello Psycallepo about his city, Aleppo (which is also known as Shahba). A home he was forced to leave.

Yasmin Fedda is a documentary filmmaker whose films have focused on themes from Edinburgh bakeries to Syrian monasteries. Her films have been BAFTA-nominated and screened at numerous festivals including Sundance and Edinburgh International Film Festival. Films include Milking the Desert (2004), Breadmakers (2007), A Tale of Two Syrias (2012) and Siamo Toranti /We are Back (2013). Fedda has also made broadcast films for the BBC and Al Jazeera. Her most recent film, Queens of Syria, won the Black Pearl award at the Abu Dhabi Film Festival in 2014. She has a PhD in Transdisciplinary Documentary Film, and is co-founder of Highlight Arts. 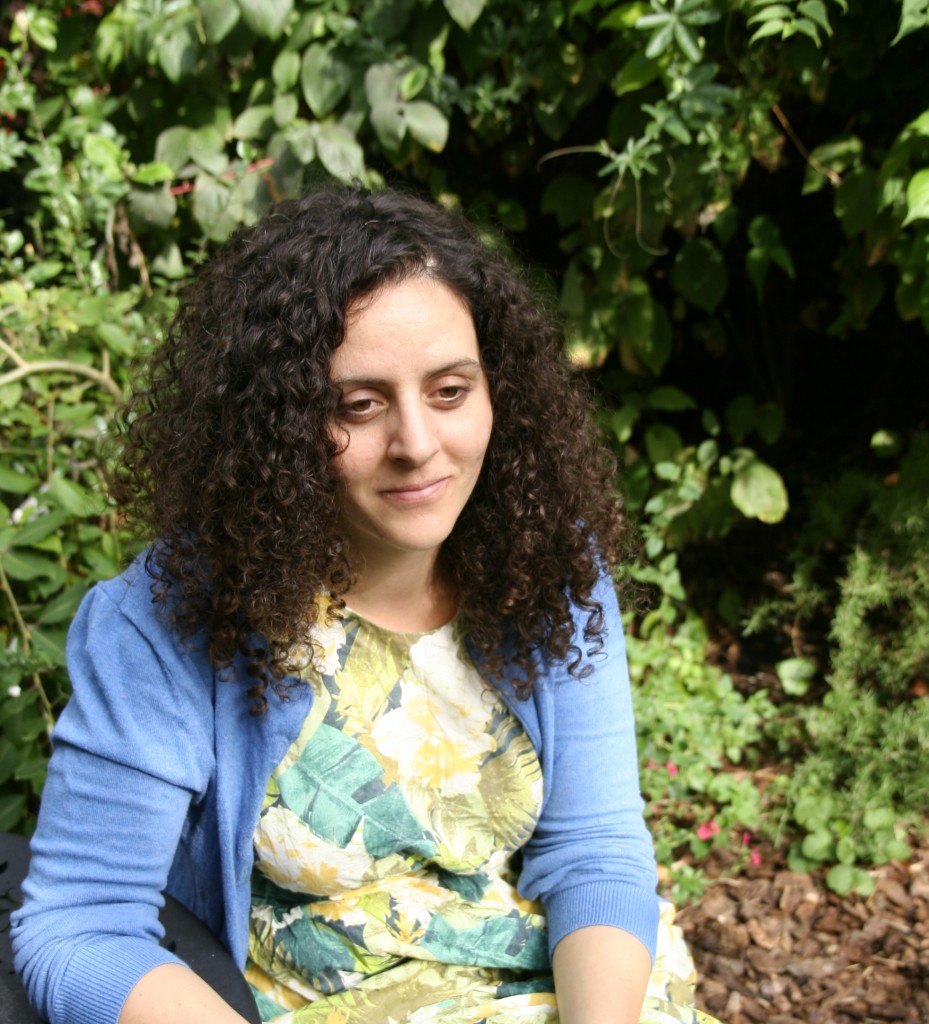